You can register online for all CASC-OR championship events at
casc.motorsportreg.com
Just look for the event you want to enter in the calendar! 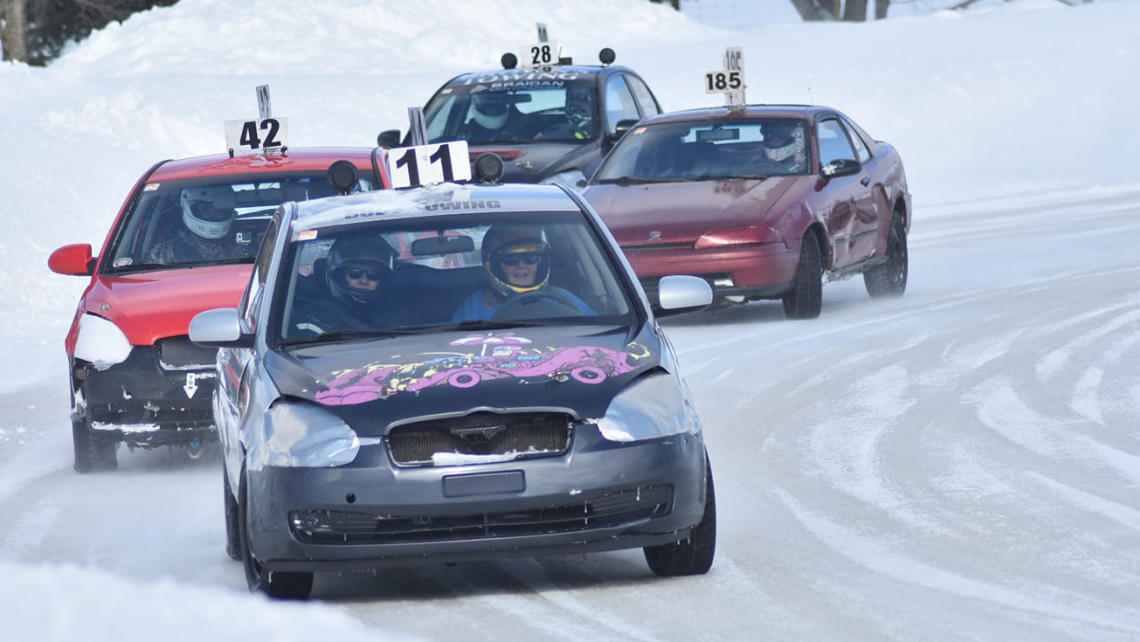 Ice Racing started in Ontario more than fifty years ago, and it continues to thrive as an inexpensive, fun part of the Ontario motorsport scene.

The events were originally held on frozen lakes and rivers – and a few still are – but in the late seventies, the Ontario championships moved to more permanent facilities at the Minden Fairgrounds in Minden, Ontario.

The track is laid out, then repeatedly coated with water until a thick layer of ice is built up between the snowbanks that delineate the course. The ice race season starts in mid January and runs until early March, with six two-day events (weather permitting).

Why do I want to go ice racing?

Ice racing is the least expensive form of wheel to wheel racing there is. It's the best way to improve your car control, bar none. Plus, it will give you much greater confidence in everyday driving during bad winter conditions.

Just about anyone. In order to go ice racing, you have to have a valid driver's licence, so the lower age limit is 16 years of age. There is no upper limit - there are several ice racers in their eighties (and they still do their share of winning, too).

Drivers come from all walks of life, ranging from people with no motorsports experience to pro drivers working on their skills.

How inexpensive is it?

Many people compete for a season for between $1500-3000. You can't get twelve days of racing for that anywhere else.

Do I need an expensive car to go ice racing?

The cars are typically older model cars which have been taken off the road for reasons of cosmetics (rust) or age that are still mechanically sound. They are generally smaller cars, because they are easier to locate and usually more competitive.

Any car with an engine capacity of less than 3.0 litres is eligible to compete in one of the classes. It doesn’t matter whether the car is a sedan, coupe, station wagon or small pick-up, equipped with an automatic or standard transmission, front wheel, rear wheel or all wheel drive, just as long as it is mechanically sound – and within your budget. It's more important that it starts well and runs smoothly than it has a lot of power - you can spin your tires in any car on ice!

A competitor can spend as little as three or four hundred dollars on a car, to several thousand. A well prepared ice racer can be expected to last at least three or four years, and in Ontario there are quite a few cars which have been ice raced for more than a decade!

In ice racing, there are three basic configurations of cars divided by their size and their driven wheels.

The minimum car preparation would involve the removal of headlights, tail lights and any exterior plastic trim that could break in a collision. Bumpers must be modified so that they cannot ‘hook up’ with another car and cause a crash. The brakes, steering and safety equipment must be in proper working order. Some additional brake lighting must be installed in the rear window or on the roof to make the lights more visible from behind.

If you wish to improve the car there are many simple things you can do. The most common is to remove as much weight as possible from the car, particularly in the area of the non-driven wheels. This usually involves the removal of the rear seats, all upholstery panels, and anything else that is not necessary in a racing car!

Weight can be added in the area of the driving wheels to improve traction. The amount of weight necessary might be small in the case of a front wheel drive car, up to hundreds of pounds for a rear wheel drive car.

The only safety equipment that a driver is required to have is a helmet that meets the standards outlined in the CASC Ontario Ice Racing Rules. Other than an approved helmet, no other specialized safety equipment is required – the manufacturer’s original three-point safety harness is acceptable.

One thing to be aware of - at any given time there are a few ice race cars that are for sale on the CASC-OR forums or the ice racing Facebook page. These cars are reasonably priced and have had all the preparation done to be ready to run, usually including the tires you need for ice racing.

It's the easiest way to get started.

So I guess tires are important on ice?

Probably the single most important element of ice racing is tires. There is a fine balance between the weight carried over the tire, the power being transferred, and the grip of the contact patch. The grip (technical term - co-efficient of friction) is a combination of the tire’s rubber compound, the tread design, the surface area of the tire, inflation pressures, and the surface condition and temperature of the ice. As the condition of the ice can change from lap to lap, it’s a challenge to get maximum power down while maintaining traction.

Each car configuration is able to race on either of two types of tires, "rubber-to-ice" and "street studs".

The basic classes in ice racing are the rubber-to-ice classes. These classes are restricted to commercially available winter tires with no studs or other materials in the tires.High performance winter radials from many manufacturers are used in these classes.

In rubber-to-ice classes, the tire surface can be improved by tractionizing, a process which mechanically chews up the surface of the tire to improve its grip. Many clubs own a tractionizing machine, or you can get it done trackside for a small charge per tire.

The alternative tire is the street stud tire. The street stud classes are a relatively recent thing to ice racing. One of the intricacies of ice racing is that as the rubber-to-ice cars have more races the ice becomes polished by all the wheels spinning on it and the track becomes slower and more difficult to drive on with each successive lap.

The street stud tires are all the same brand of tire, and they contain a short rounded stud in the tread. This doesn’t give the traction of a full racing stud, but it does ensure that there is a moderate and consistent level of traction through the entire race which many drivers prefer. A side effect of street studs is that everyone is competing on more or less equal tires.

The cars then are split up by tire type then by car configuration into different races, so cars of similar performance race against each other.

It is possible to have a set of each type of tire, and change them between races so you can run in both race groups for twice as much fun.

That's part of how ice racing keeps the cost of racing down.

For every combination of car type and tire type, there are two races with the second one called "second driver". The idea of course is that the same car can be used by two different people, one in each race

Mind you, if you can't get enough ice racing from one set of races, one driver can enter both first and second driver races and race twice as many times in a weekend.

Can I bring my family and friends?

Glad you asked that, too.

First, spectating at ice races is free and fun. You can see nearly the whole track from any vantage point so you can follow one car through the whole progress of the race.

The neat thing though is that the ice racing rules permit a passenger in the races. Nearly anyone can get an accepted helmet, sign a waiver, and ride in all the races! Passengers get involved in the racing almost as much as the drivers - it's the best seat in the house!

You had me at "racing" - how do I get involved?

In order to participate in ice racing in Ontario, you must first be a member of a CASC Ontario Region affiliated club (with one exception described below).

There are six clubs that organize ice race events (see the events schedule for specifics) who can answer just about any question you may have about ice racing. But you don't have to belong to one of those clubs - there are close to thirty CASC-OR clubs and many of the others have members competing in the ice racing series. Contact any club – they’ll be glad to hear from you. Ask about their club’s philosophy, experience, number of active racing members, and try to attend one of their meetings. Once you’ve identified a club you’d like to join, do so – it will prove to be your biggest source of information and ongoing help as you get started.

Next, you will need a CASC-OR competition licence - a "C" licence is all that is required but higher grades are OK for ice racing too.

To join a club and get a licence, the easiest way is through the CASC-OR Members Website. There you can join a club, apply for a licence, and upload your headshot photo.

I'm on the fence - can you sweeten the deal?

Well, yes we can.

We're sure when you try ice racing once, you'll be back (an Indy 500 driver once described racing by saying "it's like a drug they don't sell"). So here's the sweetener.

You find a prepared car and a helmet you can borrow that pass our rules. Talk to people on the CASC-OR forums and Facebook pages to see if there are any available. There always are, and the people already ice racing will go out of their way to help and encourage you to get involved.

Also, get one of these experienced ice race competitors to agree to come out as your passenger to coach you. Frankly, by having that person with you, you will have more fun because your first time on the ice it can be pretty hard to get the car to go fast.

When you've done that, you can come to an ice race and enter for one day. We'll sell you a temporary licence for that day for the cost of a coffee run. To find out more about the program, email to iceracedir@casc.on.ca.

I want to know everything about ice racing - how do I find out more?

On this page there will be an area titled "Rules" - download the most recent Ice Racing Rules and the CASC-OR GCR (General Competition Regulations). They have detail on everything about how cars are prepared, what you have to know and do as a driver, and how events are run.

There's another area called "Competitor Information" - it has information like a list of all the places you can stay around Minden.

You can also get all manner of information and help getting involved with ice racing through the CASC-OR ice racing forums and the ice racing Facebook page.

The level of camaraderie in ice racing (and frankly in all CASC-OR racing) is high, and the people who race against you will be the first ones to help you get racing and the first to congratulate you when you have a good race.